Pensions provide a sweet deal for some retirees

Fewer companies are providing their employees traditional pension plans, requiring employees to rely more heavily on 401k and other private retirement plans.  The exceptions are government jobs and in unionized firms where employees are continuing to benefit from programs established or negotiated when civil service jobs paid lower salaries or when there was less international competition for America’s goods and services.  Older employees may also benefit from pension plans received as a result of continuous service at firms that once offered pension plans to all employees as a normal employment benefit.

A pension is an arrangement to provide a person with an income during retirement when they are no longer earning a steady income from employment.  They are retirement plans that are mostly fully paid by the employer, providing the employee with defined benefits in retirement.  But often they require both the employer and employee to contribute money to a fund during the employment period in order to receive benefits.

Pensions are a tax-deferred savings vehicle that allows for the tax-free accumulation of a fund for later use for retirement income.  Pension plans are therefore a form of "deferred compensation".  Rules governing the establishment, funding and payout provisions for pensions are usually governed by pre-determined legal and/or contractual terms.  Retirement plans may be set up by employers, insurance companies, the government or other institutions such as employer associations or trade unions.

Retirement plans may be classified as defined benefit or defined contribution according to how the benefits are determined.

Some types of retirement plans, such as cash balance plans, combine features of both defined benefit and defined contribution plans.  They are often referred to as hybrid plans.  Such plan designs have become increasingly popular in the US since the 1990s.  Examples include Cash Balance and Pension Equity plans.

Defined benefit plans are the more traditional pension plans.  Their benefits are based either on the employee’s final salary at retirement or the employee’s Final Average Pay (FAP).  While the Final Salary Plan is popular among unionized workers, FAP remains the most common type of defined benefit plan offered in the United States.  In FAP plans, the average salary over the final (3-5) years of an employee's career determines the benefit amount.

Many defined benefit plans include early retirement provisions to encourage employees to retire early, before the attainment of normal retirement age (usually age 65).  Companies would rather hire younger employees at lower wages.  Some of those provisions come in the form of additional temporary or supplemental benefits, which are payable to a certain age, usually before attaining normal retirement age.

And there is the ceiling on pensionable compensation for “qualified” pension plans under the provisions of the Internal Revenue Code, Section 401(a)(17).  This limit is $305,000 in 2022.

Defined benefit plans may be either funded or unfunded.  In an unfunded defined benefit pension, no assets are set aside, and the benefits are paid for by the employer or other pension sponsor as and when they are paid.  Pension arrangements provided by the state in most countries in the world are unfunded, with benefits paid directly from current workers' contributions and taxes.  This method of financing is known as Pay-as-you-go (PAYGO).

In a funded plan, contributions from the employer, and sometimes also from plan members, are invested in a fund towards meeting the benefits.  The future returns on the investments, and the future benefits to be paid, are not known in advance, so there is no guarantee that a given level of contributions will be enough to meet the benefits.  Typically, the contributions to be paid are regularly reviewed in a valuation of the plan's assets and liabilities, carried out by an actuary to ensure that the pension fund will meet future payment obligations.

There are several characteristics of traditional defined benefit plans worth mentioning:

These factors make defined benefit plans better suited to large employers with less mobile workforces, such as the public sector (which has open-ended support from taxpayers).

The pension a federal employee earns is one percent of salary for each year of federal service, and it is based on the average of the highest 36 months of federal pay.  In order to retire with this amount, the federal employee must meet one of four different ways as published by the US Office of Personnel Management (OPM).  Some of these involve the Minimum Retire Age (MRA) which is between 55 and 57 depending on the year of birth.

Many teacher pension plans set a retirement age at 65, but may allow teachers to take early retirement at 50 or 55.  Typically these plans multiply the number of years of service by a percent (e.g., 2%) of the average of the final three years of salary to determine annual pension benefit.  This would provide a teacher with 30 years of service and $75,000 salary with a $45,000 annual pension.  Teachers in 36 states receive both Social Security and pension checks.

However, according to the Service Employees International Union (SEIU), seven out of 10 public employees get less than $30,000 per year in retirement.   According to the SEIU, “after decades of full-time work for the state, the sad truth is that far too many retired state employees receive yearly amounts that force them to live in poverty.”

Non-profit companies are not required to pay premiums to the Pension Guaranty Corporation, and correspondingly, their pensions are not protected. My spouse recently received a letter from her prior employer, a long-term care facility, announcing that her May 2022 pension check would be her last as the company declared Chapter 11 bankruptcy. Chapter 11 stops creditor collection efforts and facilitates negotiations to repay creditors all or a part of what is owed. However, in the words of the creditors' attorney, her chance of receiving any further compensation is "slim to none" as pensioners are at the bottom of the list of creditors.

I'm mentioning this to caution anyone receiving a pension from a non-profit that their income could be significantly reduced at any time without warning. 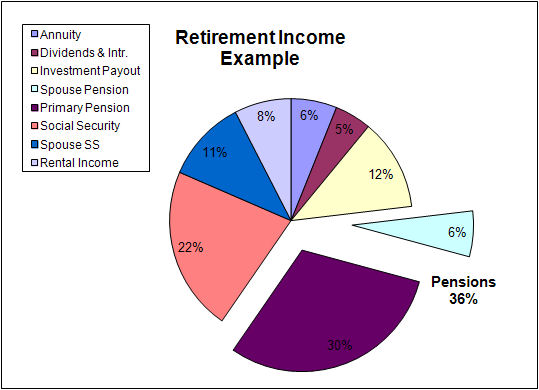 Income from a pension plan is generally received as a fixed sum paid regularly (monthly) in the form of a guaranteed life annuity.  With this payment option retirees do not bear the risk of low investment returns or of outliving their retirement income.  Some pensions, mostly those for federal and state employees, provide even better longevity protection, providing inflation protected cost-of-living-adjustments, (COLAs).

There is one important point to consider in determining which annuity option is best for you: The Single Life Annuity will provide you with the largest monthly pension income.  For this reason I would strongly recommend that you select this option.  If you desire financial protection for your spouse or other beneficiary, then use the extra monthly income that you receive from this option to purchase life insurance.  In doing this you are financially ahead if you live in retirement long enough to collect 5-15 years of benefit income.

Determining the amount of life insurance that you need and your “break-even point” is a straightforward calculation:

Retirees that receive their pension benefit as a lump sum can use this money to purchase their own annuity, transfer it to a qualified brokerage account or use it in other ways.  However, any money not reinvested in a qualified (pre-tax) investment account becomes immediately taxable.  Also, since monthly payments are made over time and may cease when the retiree dies, they are usually a better option than a lump sum.  This is because the pension provider is able to obtain investment growth and make future pension payments in inflated dollars.

As a final point, never consider selling your pension.  Several companies offer to purchase all or a portion of your pension income stream for a lump-sum cash payment.  In doing this you will almost never receive the same total payout that you’d receive otherwise.

In the United States, non-church-based private employers must pay an insurance-type premium to the Pension Benefit Guaranty Corporation (PBGC), a government agency whose role is to encourage the continuation and maintenance of voluntary private pension plans and provide timely and uninterrupted payment of pension benefits.

PBGC is a federal agency created by the Employee Retirement Income Security Act of 1974 (ERISA) to protect pension benefits in private defined benefit plans – the kind that typically pay a set monthly amount at retirement.  If your plan terminated without sufficient money to pay all benefits, PBGC’s insurance program will pay you the benefit provided by your pension plan up to the limits set by law.  The following table shows the limits for 2022: